White Rose Dumplings in Hoi An

White Rose Dumplings in Hoi An – a beautiful, delicate, and pure cake like a white rose

Hoi An White Rose Dumplings is a famous delicious and strange dish, this is one of the typical flavors of Hoi An ancient town. This is a dish that is both simple and luxurious in Hoi An. 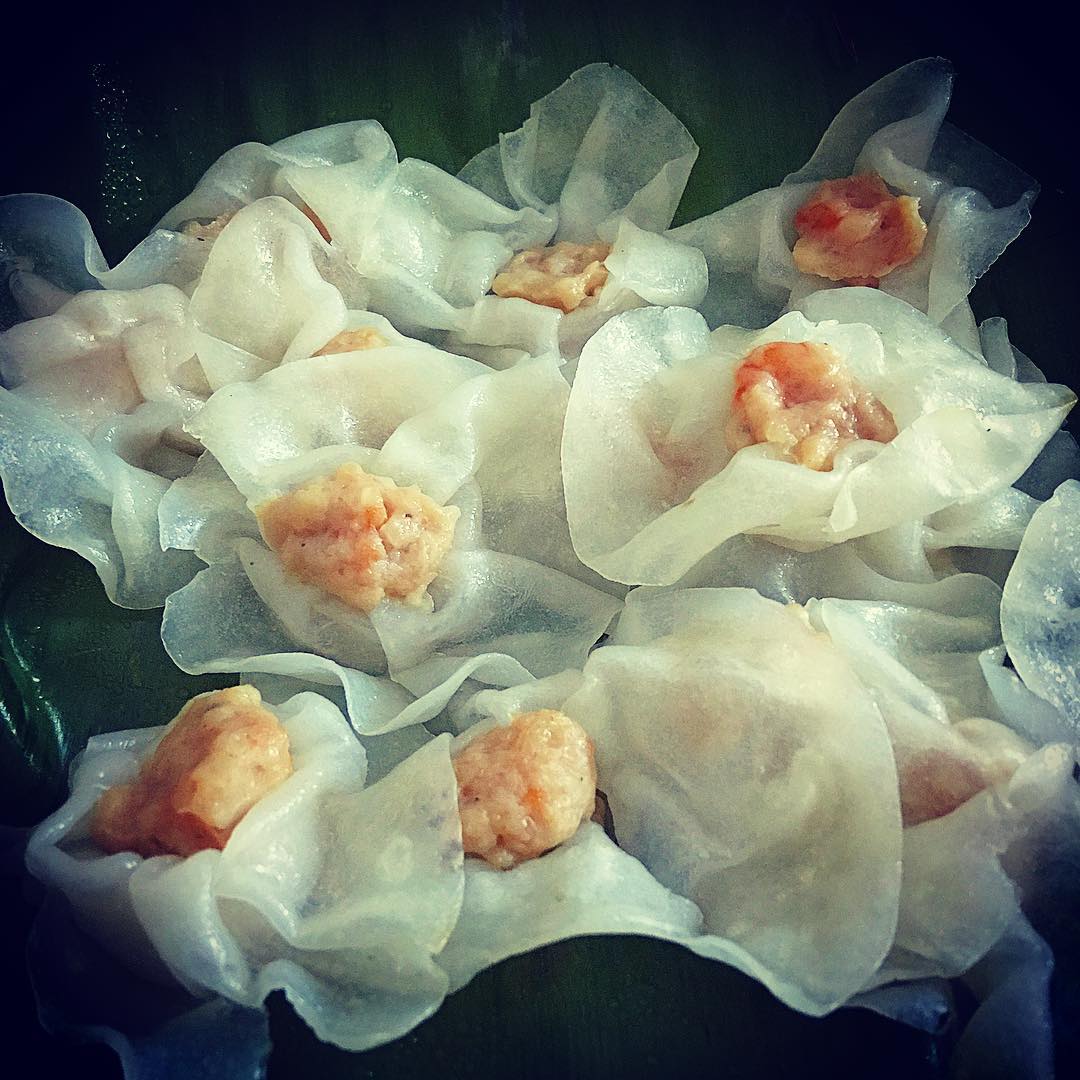 Dumplings with a filling made from fresh shrimp, shaped like a blooming flower

If we pay attention, we will see that Hoi An White Rose Dumplings, although they are two types of cakes, two different names, they are always present together on a plate of cakes. On the surface, the dumpling is still a familiar round cake but smaller than other types of dumplings, and the mouth is spread out to look like a rose-shaped cake. The cauldron cake that we often eat, is like the moon, but the bowl is bigger and more meticulously molded, it is shaped like a cauldron handle, so it is called a cauldron cake. 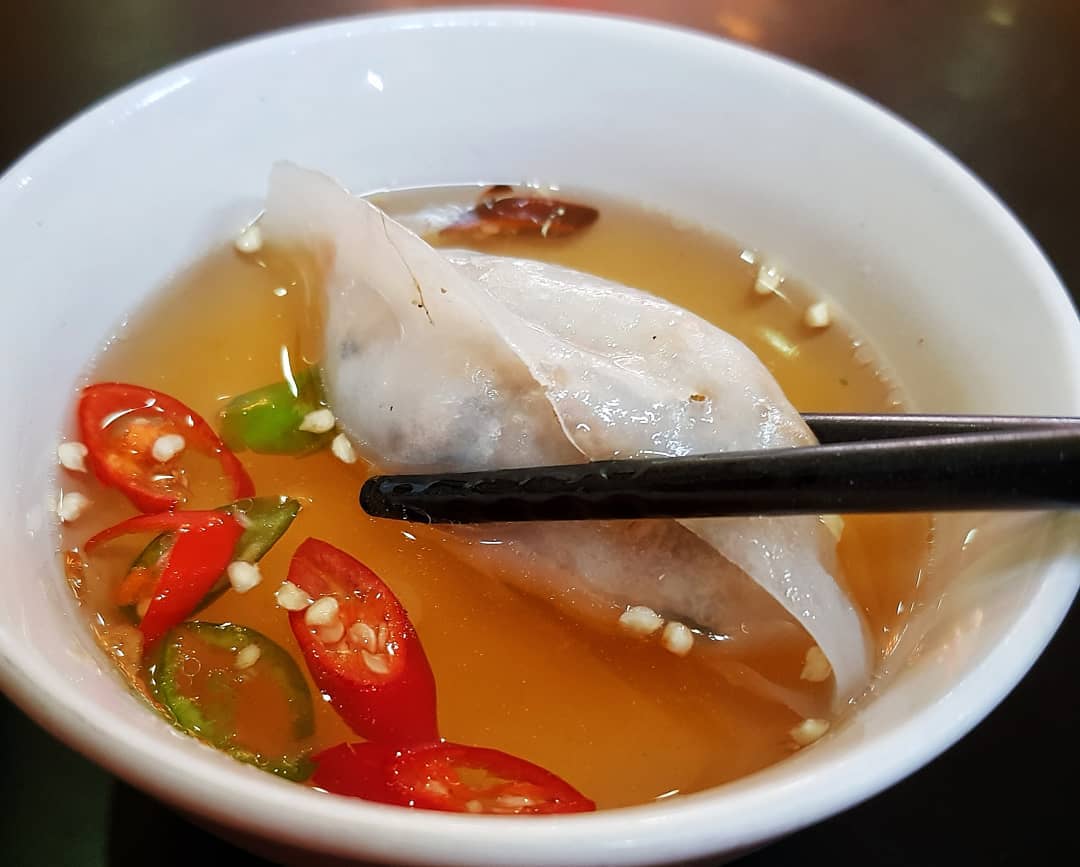 2. How to make the Hoi An White Rose Dumplings

The taste of Hoi An White Rose Dumplings always makes diners feel familiar but equally strange because of the ingredients that make Hoi An's cake in Quang Nam. With the characteristics of Quang dishes, the preparation of this dish is quite simple, but requires the baker to be very careful, meticulous and patient in each processing stage.

The main raw material for making the crust is rice flour, selected from fragrant rice with firm grains, thoroughly washed so that there are no husks or grit. Then bring the cleaned rice into a pot of water and grind it into a powder. Water used to grind flour must be taken from well water without alum, without impurities, in general, pure well water to make the most standard smooth white crust. 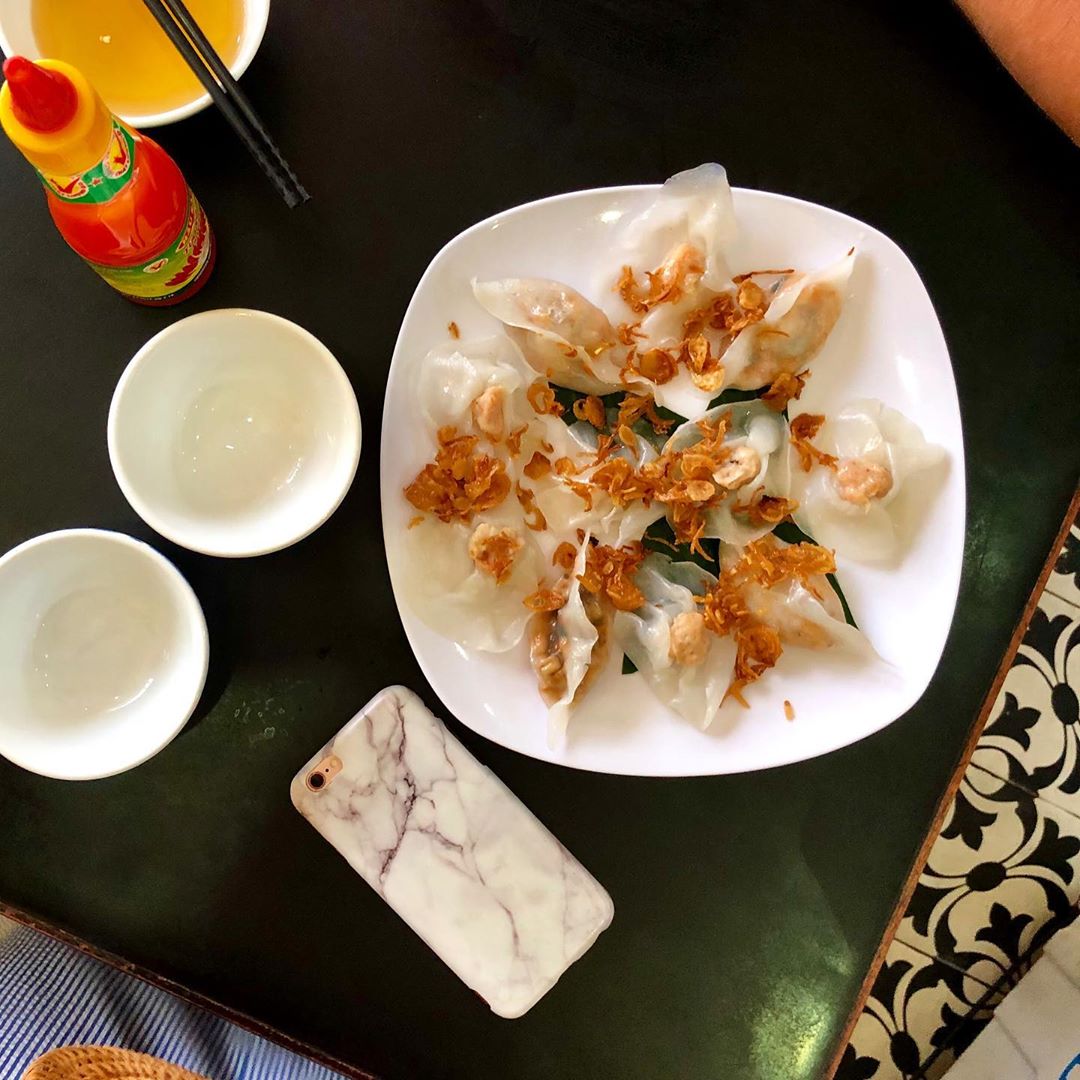 To create these beautiful little cakes is a elaborate process

Next is the stage of distilling flour with water, which Hoi An people often call "powder", this step is repeated about 15-20 times until the powder settles and the water is clear, then drain the water. Knead the dough again and give it a clean bowl.

The filling part consists of two different types, distinguishing between dumplings and cauldron cakes. The dumplings use shrimp as the main ingredient, which is carefully pounded, fried, and mixed with spices such as onions, pepper, salt... And the cauldron cake also has shrimp, but with pork, wood ear, mushrooms, etc. bean sprouts, scallions, pepper, spices, and in the bamboo shoot season, there will be more bamboo shoots, the filling is mixed well, then this mixture is stir-fried before wrapping. 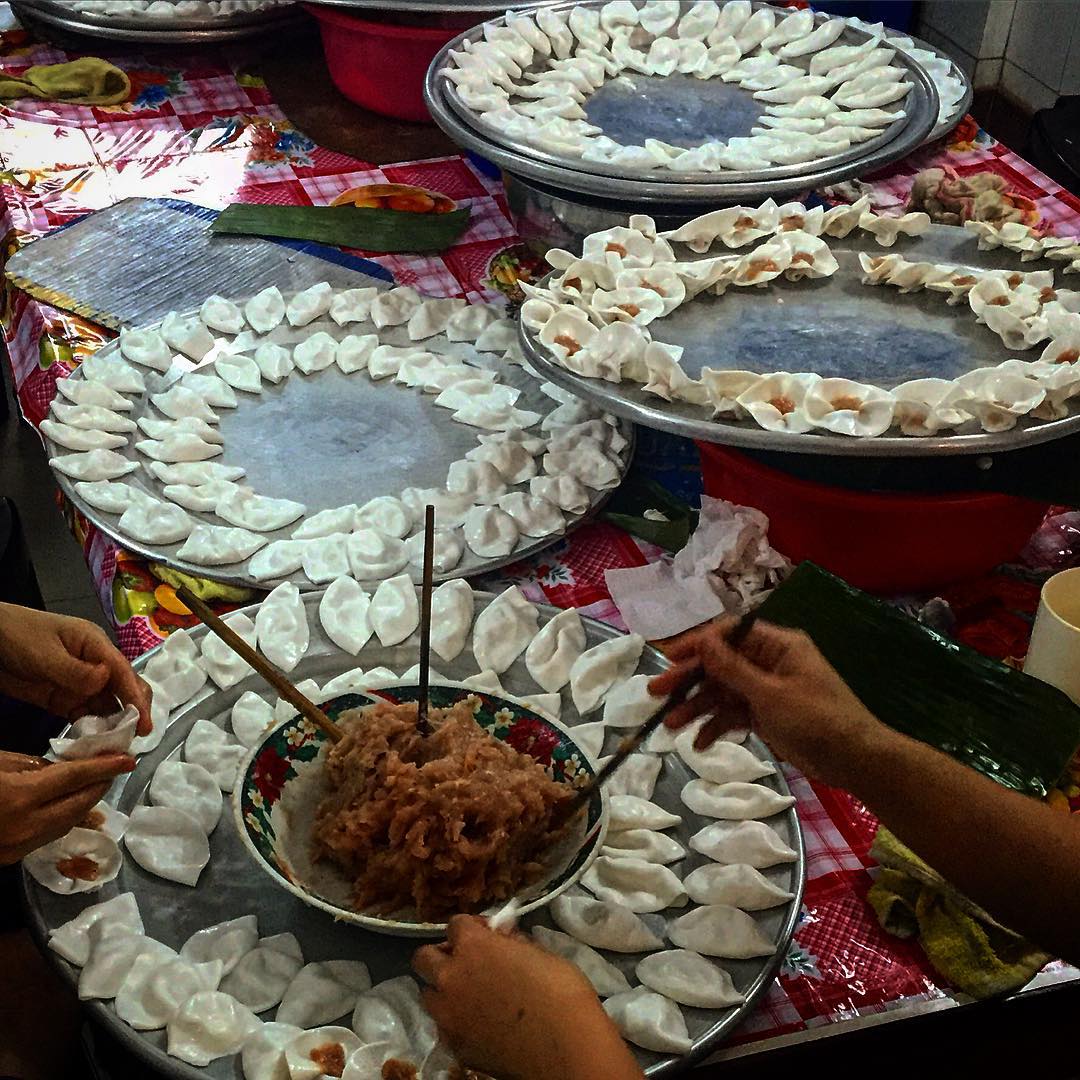 After being lifted, the dough will be stuffed into a long mold. Use two fingers to dip in a cup of oil to apply evenly to both hands, then break each dough ball with your fingers to gradually roll the dough into a thin and even crust. , use your thumb to press the center of the crust to get space to stuff the filling. 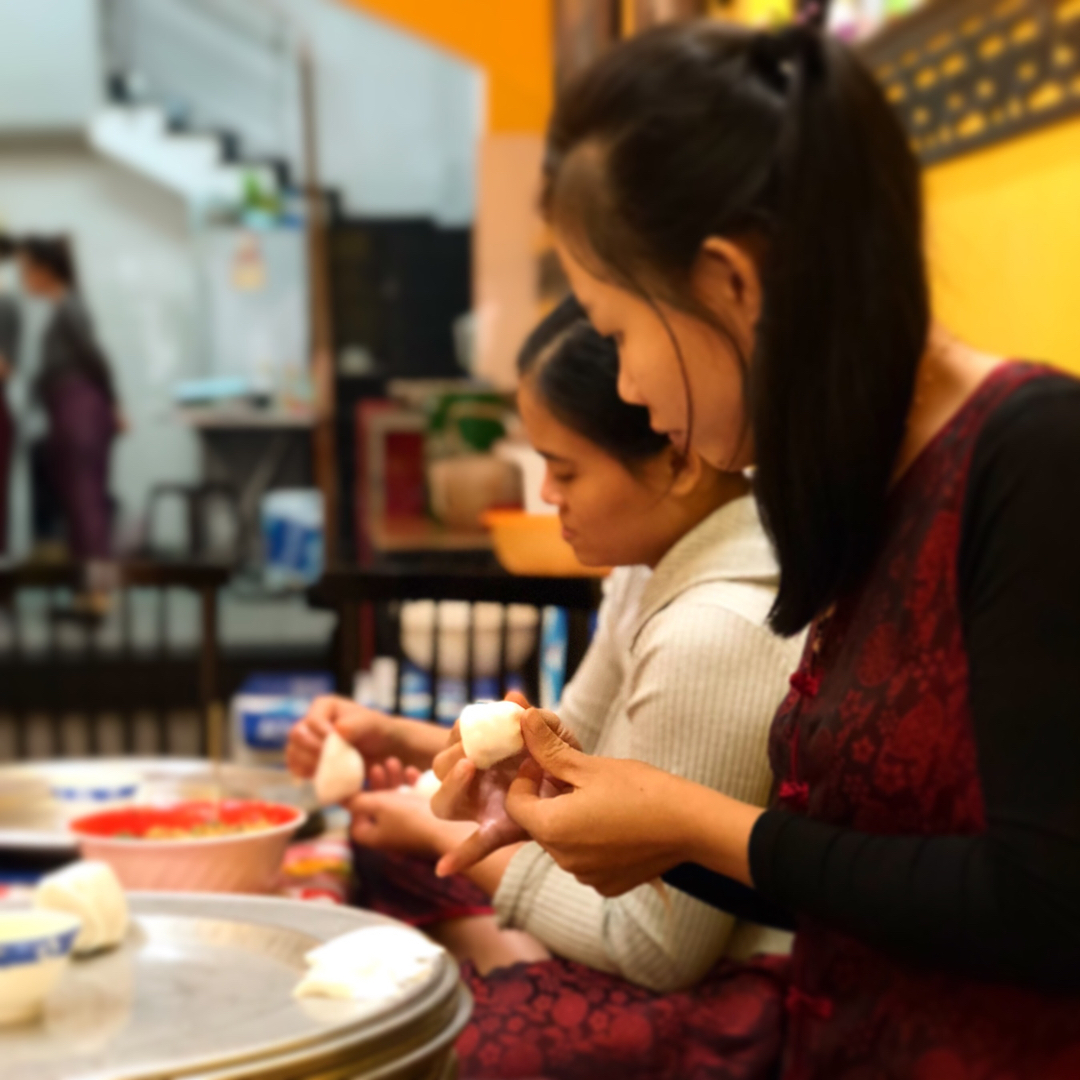 The crust should not be too thick nor too thin

3. Enjoy the taste of Hoi An White Rose Dumplings

After the cake is steamed, it will be displayed on a plate and enjoyed while still hot. To highlight the white color of the cake, people often put a layer of green leaves on the plate before placing the cake. On a plate of cakes, dumplings are usually presented in the middle, while cauldron cakes are displayed around the plate, a layer of fried onions is placed in the middle. Spread evenly over the cake plate. Hoi An White Rose Dumplings has the same sweet and sour dipping sauce prepared according to the family's secret recipe. 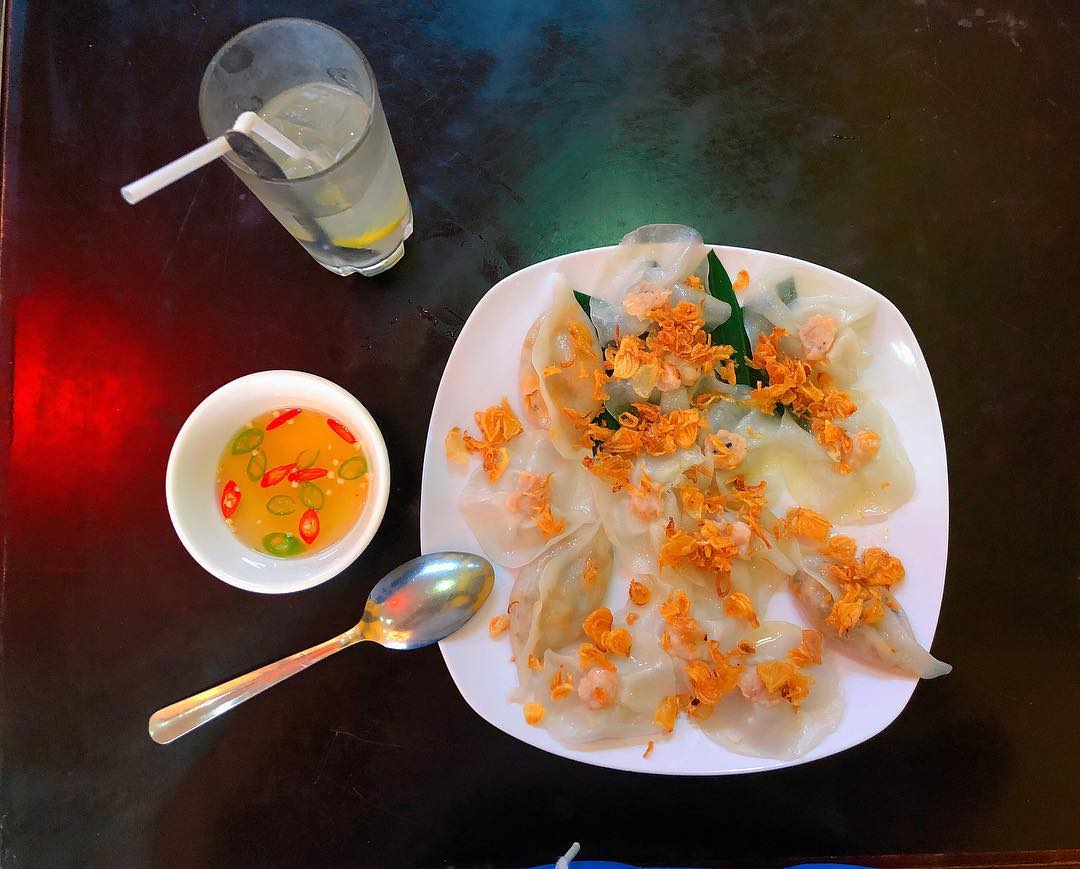 Cake after when it's steamed, it's best eaten hot

The combination of dipping sauce and cake makes it possible for diners to feel the sweetness of the shrimp, the meat, the chewy fatty aroma of white rice flour, the greasy taste of fried onions, and the pungent flavor of chili. 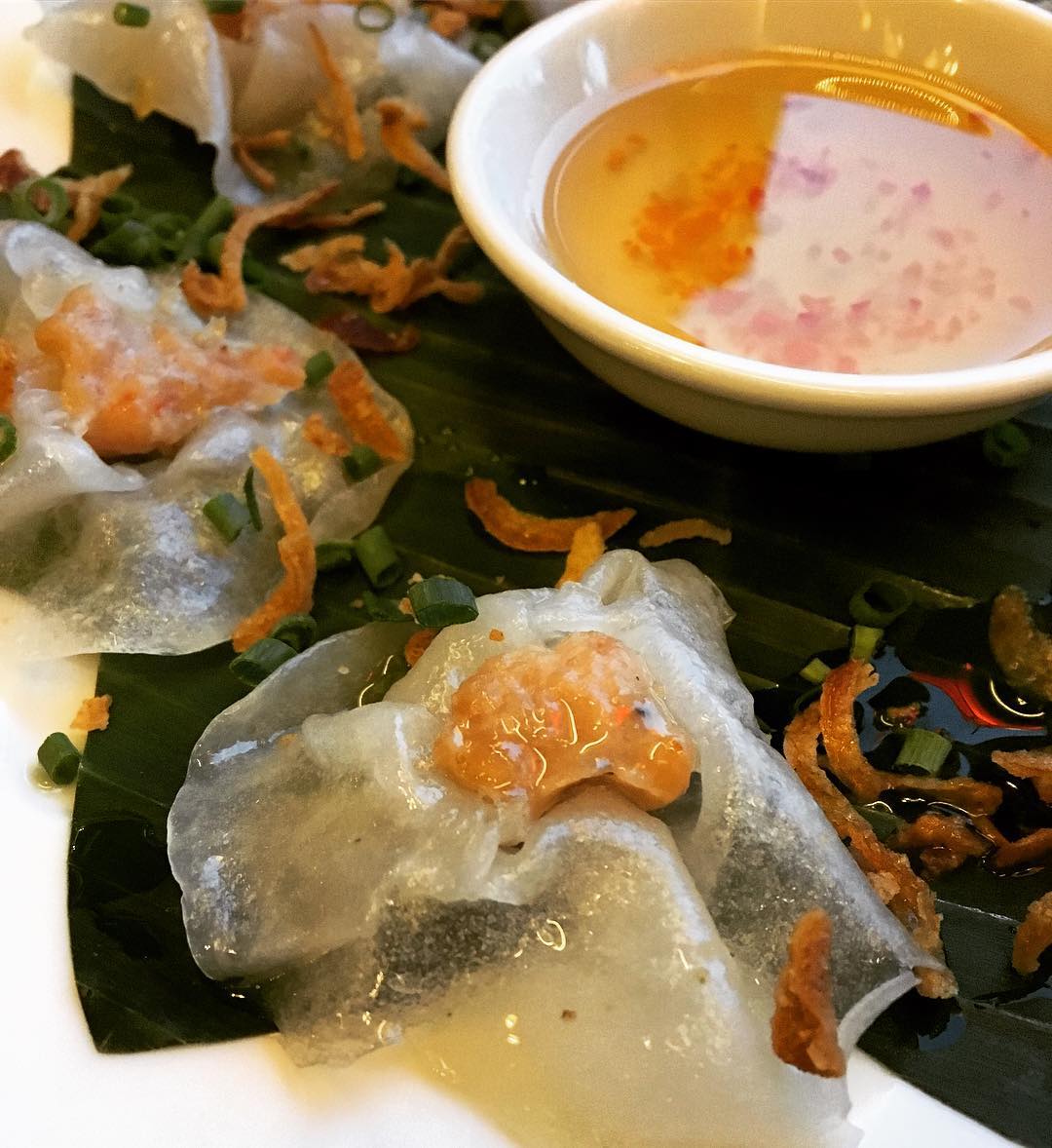 Dumplings bring the rich flavor of the meat filling, the pungent taste of pepper mixed with the freshness of the rice flour shell. The cauldron cake is a bit more mouth-watering because of the fatty, sweet, and fleshy shrimp filling. A little spicy from chili fish sauce will stimulate, make the taste of the two cakes much better.

Cauldron dumplings are quite popular dishes on the menus of restaurants and eateries in Hoi An. However, if you want to learn from A to Z about this Hoi An specialty, you must definitely visit the Banh Bao Banh Vac - an old White Rose on Hai Ba Trung Street. 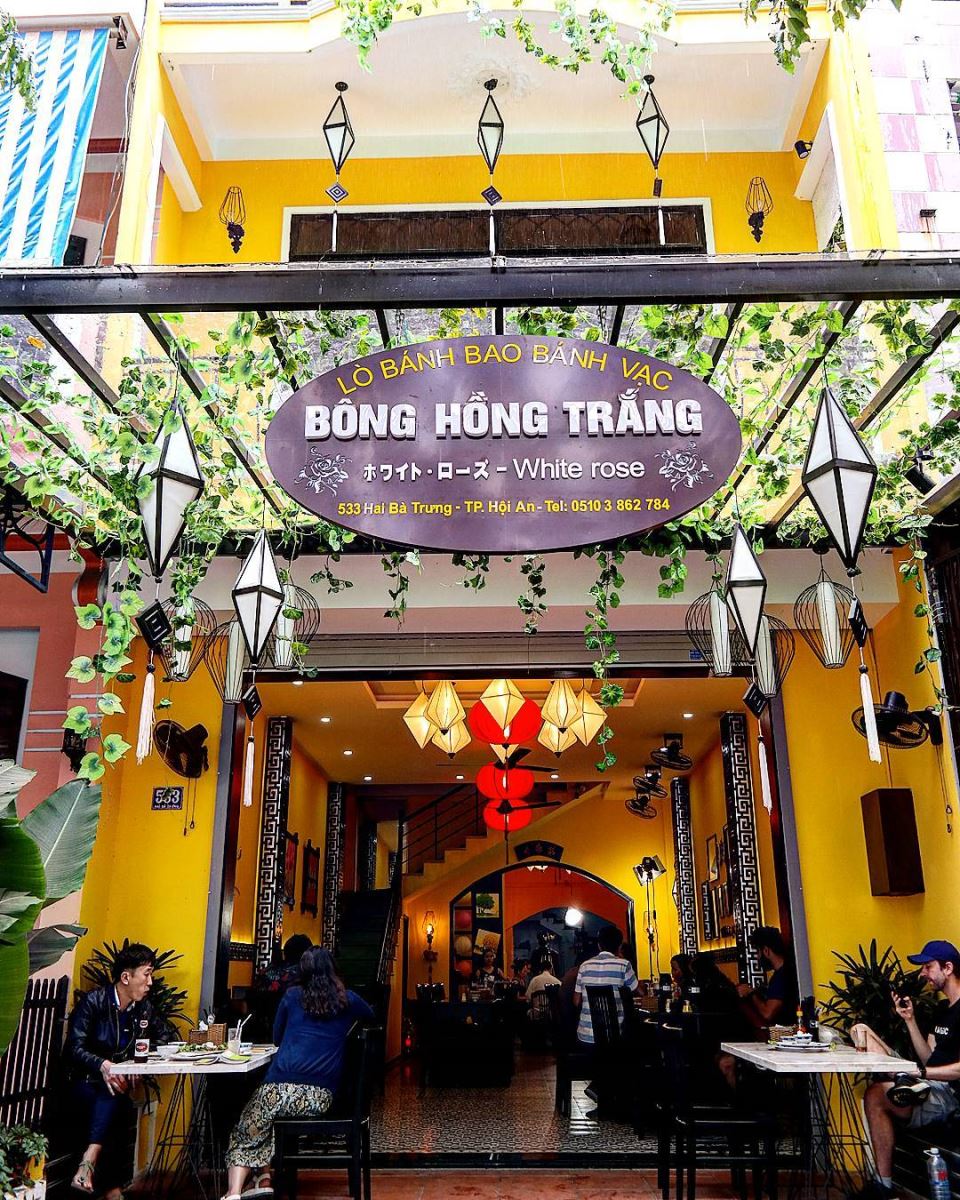 Here, visitors can not only enjoy the authentic Hoi An specialty banh cuon, but also see firsthand the meticulous, meticulous baking process of the bakers and can try it themselves. Pack these beautiful cakes. 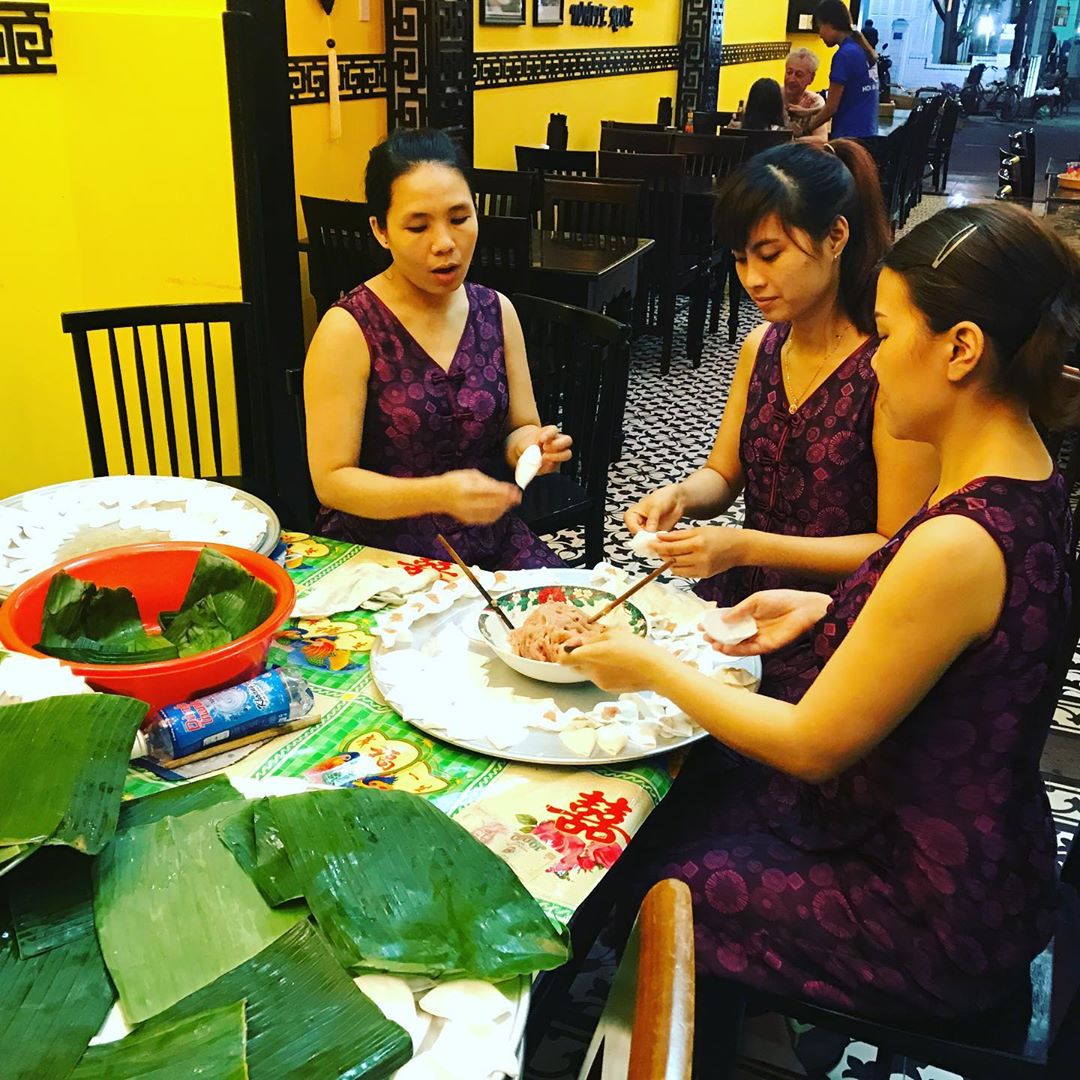 Here you will see firsthand the process of cake shaping 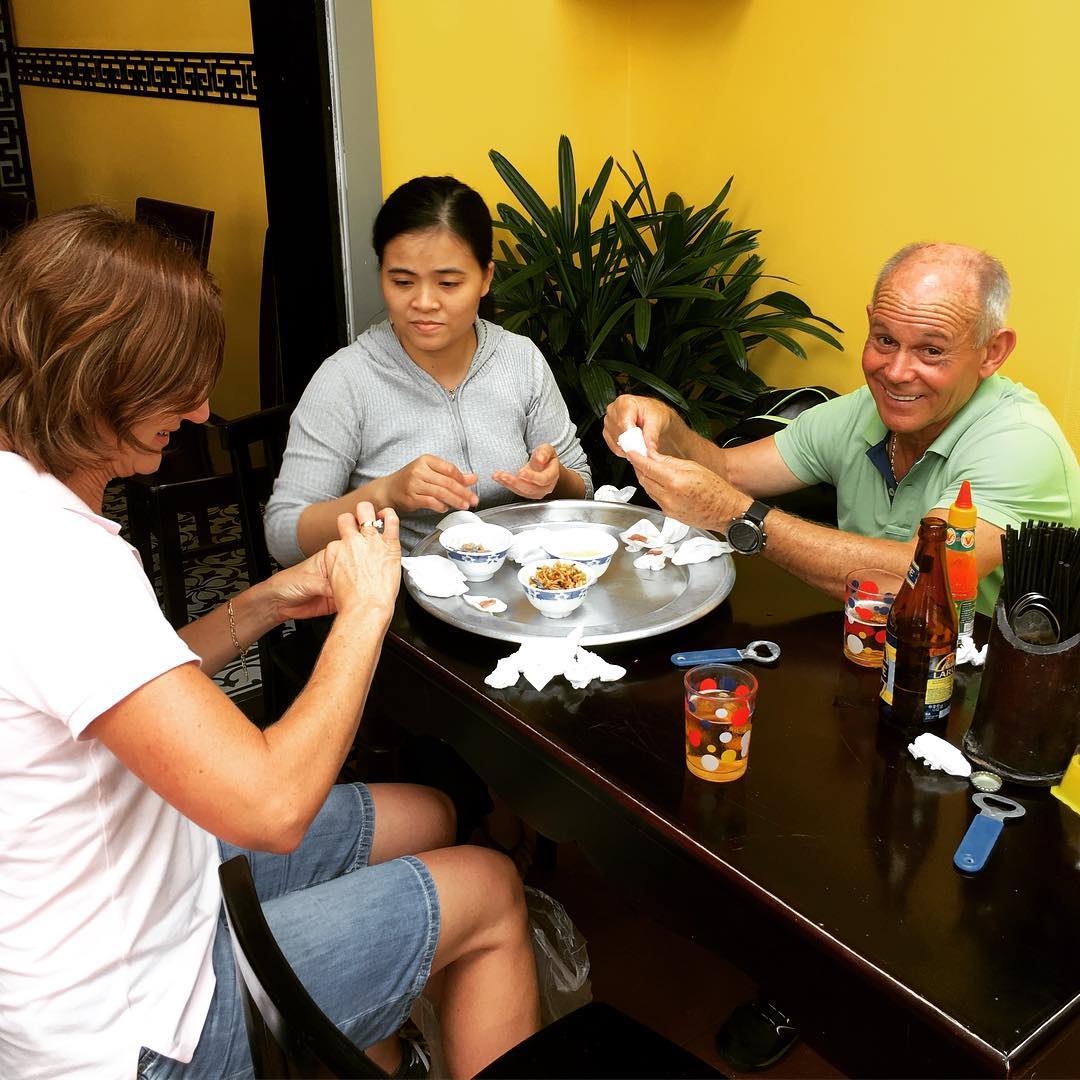 And you can even try it out

Coming to Hoi An without enjoying cauldron dumplings is not enjoying the typical taste of Hoi An cuisine - a charming land with a sophisticated culinary culture. If you have the opportunity to come to Hoi An, do not miss this special dish of transparent, delicate but also very rich cauldron dumplings to understand more about the culinary culture of the small ancient city located on the shore. The beautiful Thu Bon river of Quang country.

The Monument of Vietnamese Heroic Mother

Experience On The App